Spiders can be distinguished easily from insects. All spiders have two major body regions and four pair of legs; insects have three body regions and three pair of legs. Spiders vary widely in color, shape, size, and habits. All produce venom that is poisonous to their normal prey. Few spiders are considered dangerous to humans, however. These animals are predaceous by nature and use their venom, which is injected through hollow fangs or chelicerae, to immobilize their prey.

Spiders normally feed on insects and other small arthropods, but some large tropical species capture small mice, rats, birds, or fish. Spiders can only ingest liquids. Digestive fluids are either injected into the prey or regurgitated on to it. The spider then imbibes the liquified material.

Spiders are generally considered beneficial because they consume large numbers of insects and are of almost no importance as disease carriers. Unfortunately, they do not differentiate between beneficial and destructive insects in their diet. Spiders produce silk, which is secreted as a liquid through the spinnerets and hardens on contact with air. Many different types and textures of silk are produced by various species. The silk is used to construct snares or webs, egg sacs, drag-lines, and ballooning threads. Many spiders produce web snares of various designs to trap prey, and all construct a silk sac in which to deposit their eggs. Some egg sacs are quite elaborate, with four or more distinct types and many layers of silk, while others have only a few individual strands. Most species attach drag-lines of silk to the substrate at intervals wherever they go. This is why spiders always seems to have a silk thread to hang by if knocked from their perch. "Ballooning" is the term used to describe the habit of spiderlings of sailing through the air on wind currents. These young spiders climb to a high point and release silk strands until the drag from the wind is sufficient to support their weight. Then, they release their hold and sail away, sometimes for considerable distances. it is these ballooning threads (sometimes called "gossamer") that can fill the air on clear days as spiderlings disperse to new areas.

Life History
Spiders reproduce by laying eggs that hatch into spiderlings. For a spider to grow, it must shed or "molt" its rigid outer skin. The increase in size from one growth stage to the next occurs between the time the old skin is shed and the new one hardens. Most spiders live either one or two seasons, and molt from 4 to 12 times. Some tarantulas can live up to 20 years. Depending on the species, spiders over-winter as eggs, spiderlings in the egg sac, immature spiders living outside the egg sac, or as adults.

Poisonous Spiders
Spiders attempt to bite humans only as a last resort when threatened, injured, or trapped in clothing. They prefer to retreat rather than attack, and will generally avoid contact with humans. A large portion of the spiders commonly encountered cannot penetrate human skin with their tiny fangs. The majority of those capable of biting people produce a venom that has either a relatively low toxicity to humans or is injected in insufficient quantities to cause a serious reaction. The typical reaction to a spider bite consists of localized inflammation, swelling, and pain similar in intensity and duration to that resulting from a wasp or bee sting. Symptoms usually disappear in 12 to 24 hours. Only a few people suffer an allergic reaction to bites from spiders not considered poisonous to man. In general, children are more sensitive to spider bites than adults. Of the hundreds of species of spiders that occur in Southeast Texas , only two are known to cause a significant toxic or poisonous reaction in humans--the black widow and the brown recluse. Persons most likely to suffer severe or prolonged effects from toxic bites are the very young, the aged, or people in poor health. Anyone who believes they have been bitten by either of these two spiders should see a physician immediately. If possible, capture and/or kill the spider (try not to crush it) and take it to the physician for a positive identification. 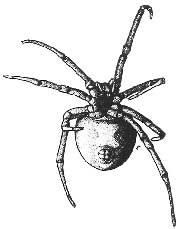 Adult females have shiny, black, rounded abdomens, and are approximately 1/2 inch long, not including the legs. Most individuals have a reddish-orange hourglass-shaped mark on the underside of the abdomen, but there is considerable variation in this marking. Some specimens have a complete hourglass figure, while in others the mark is reduced to two spots or, in some cases, no markings at all. Coloration on the back of mature females ranges from completely black to black with red, white, or even yellowish markings. Adult males have smaller bodies, longer legs, generally more red and white markings, and do not feed or bite. Newly hatched spiderlings are predominantly white or yellowish-white, and gradually acquire more black and varying amounts of red and white with each molt.

Years ago, black widows were notorious residents of outdoor toilets and storm cellars. As the number of these facilities decreased, so did the incidence of black widow bites. This spider's preferred habitats now include dumps, trash piles, and isolated areas in and around houses. Black widow spiders spin their webs near ground level. They often build their webs in protected areas, such as in boxes and in firewood. Black widow spiders are often found around wood piles and gain entry into a structure when firewood is carried into a building. They are also found under eaves, in boxes, and other areas where they are undisturbed.

The venom of a black widow spider is a neurotoxin and is used as a defense. Black widow spiders do not bite humans instinctively. Black widow venom is reported to be as much as 15 times more toxic to humans (by volume) than that of the prairie rattlesnake. The black widow spider bite can cause severe pain. The most pronounced symptoms are severe abdominal and muscular pains. Other possible symptoms include profuse sweating, swollen eyelids, alternate salivation and dryness of the mouth, lack of localized swelling at the site of the bite, nausea, vomiting, development of a rash, and coma. Additional complications can occur due to infection of the bite. Symptoms usually diminish in several hours and are gone after several days. Young children and the elderly are especially susceptible to a severe reaction to a black widow spider bite. 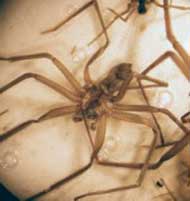 As the name implies, this spider is brown and rather shy. Brown recluse spiders have a characteristic dark brown violin marking on their back. The recluse, also known as the "brown" or "fiddle-back" spider, has body dimensions of approximately 3/8 inch long by 3/16 inch wide. Including its fully extended legs, a mature brown recluse would be slightly smaller than a fifty-cent piece. General body color varies from light gray-brown to reddish-brown. The most predominant marking is a dark brown violin- or fiddle-shaped mark located on the back, with the neck of the fiddle pointing toward the abdomen. Other spiders that may occur in and around structures can be confused with the brown recluse. Fortunately, the fiddle-shaped mark and the presence of only six eyes (arranged in three pairs on the front of the head region) should be sufficient to differentiate this spider from the harmless species that have no fiddle-shaped mark and eight eyes.
Brown recluse spiders are nocturnal and eat other bugs like cockroaches and crickets. Male brown recluse spiders wander farther than females and will crawl into shoes or other clothing.

Brown recluse spiders often live outdoors in debris and wood piles. They can be found indoors in storage areas and dark recesses. It weaves an irregular sheet-like web in sheltered locations outdoors and indoors in undisturbed dry areas such as basements, closets, farm buildings, and storage facilities. Clothing left hanging in such areas for long periods should be examined and shaken prior to wearing to dislodge any spiders that might be hiding inside.

Like the black widow spider, the brown recluse spider bites in defense and does not bite humans instinctively. They will bite humans when the clothing they are hiding in is worn. Individual susceptibility to brown recluse venom varies considerably and may range from almost no reaction to severe complications or even death. However, as with the black widow, fatalities are extremely rare. An intense localized pain generally develops, followed by inflammation of the area and the appearance of a white or mottled blister at the site of the wound. The bite area becomes hard to the touch and often necrosis (tissue death) becomes evident within a few days as the tissue begins to loosen or slough off. The toxin is more active on the underlying tissues than on the skin, which causes the center of the bite area to sink and the surrounding area to raise slightly. An ulcerating sore develops which may continue to increase in size and, as the toxin remains in the underlying tissues for a considerable period of time, may take several months to heal. Various systemic reactions may also occur while the ulcer is present.

No specific antivenom is available for brown recluse toxin, but various other treatments are used with some success. Early diagnosis and treatment are essential to alleviate pain, speed healing of ulcerated tissue, reduce the probability of systemic reaction, and to prevent infection.

The consistent presence of spiders in structures is often a sign of insect infestation as the spiders could not survive long periods without food. If this is the case, control efforts directed at the insects should eventually decrease or eliminate the spiders as well.

Removing spider webs and egg sacs along with frequent cleaning of closets, attics, basements, and other storage areas will discourage the establishment of spiders.

Solutions can also help you with chemical applications for spiders in and around your home or business.