Cockroaches are dark in color and have oval, flat bodies, three pairs of legs and usually two pairs of wings. All roaches have three stages in their life cycle-egg, nymph (young) and adult. Females carry a bean-shaped egg capsule (ootheca) which is full of eggs. The newly emerged nymphs are identical to their parents except for their smaller size and lack of wings. The nymphs grow into adults by periodically shedding their skins, and may appear white for a few hours until their new skin darkens.

Cockroaches can be present in almost any place inhabited by humans. These pests thrive in dirt, trash and grime, but they can infest even clean and well-organized homes. They move quickly and are especially active at night. Characteristically, most roaches hide in cracks and crevices, or between surfaces that provide darkness and cover. Inside buildings, roaches move freely between rooms or adjoining apartments using wall spaces, plumbing and other utility installations. They can be carried into structures in food and beverage boxes, grocery sacks, animal food and other household goods.

Cockroaches can eat almost anything, but they are especially partial to starchy foods and meat products. They feed on such diverse items as cereals, pastries, chocolate, milk products, beverages, cooked potatoes, glue, book bindings, wall paper, animal food, fresh or dried blood, excrement, dead animals and leather products. Worse of all, they have been reported nibbling on the eyelashes, fingernails, and toenails of sleeping children.

Most cockroaches produce a secretion or chemical that has a repulsive odor and can be detected in infested areas.

Cockroaches have been reported to spread at least 33 kinds of bacteria, six kinds of parasitic worms and at least seven other kinds of human pathogens. They can pick up germs on the spines of their legs and bodies as they crawl through decaying matter or sewage and then carry these into food or onto food surfaces. Germs that cockroaches eat from decaying matter or sewage are protected while in their bodies and may remain infective for several weeks. Recent medical studies have shown that allergens ingested with contaminated food or inhaled when dried fecal particles and fragments of bodies of dead roaches are mixed with house dust, can cause allergic reactions in some people. Roaches were even shown to cause asthma in children.

There are 55 species of cockroaches in the United States, but only five of these are troublesome in Southeast Texas. 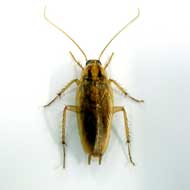 The German cockroach is the most common and the most difficult to control. Both adults and nymphs are light brown and have two longitudinal dark lines on their thorax. Adults are 1/2 to 3/4-inch long and both males and females have wings as long as the body. Nymphs are similar in general appearance, but lack wings and may be as small as 1/8-inch.
The female carries the egg capsule until a few eggs begin to hatch, and then deposits it in a dark location. Each female produces approximately six egg capsules in her lifetime, each containing 30 to 40 eggs. Adult German cockroaches have a life expectancy of six months. This roach cannot fly, but may glide very short distances if disturbed.
German cockroaches can live in almost any room of a home or building. Because these roaches require water, they prefer a warm moist environment, such as around kitchen and bathroom sinks, appliances, furnaces, water heaters and furnace ducts. German cockroaches live in communities that hide by day behind baseboard molding, in cracks,in and around pantries, cupboards, stoves and refrigerators. 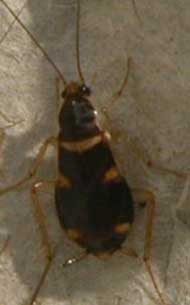 Brown banded cockroaches get their name from the two lighter bands they have across their dark brownish bodies. In addition to the distinctive banding, males have full wings, which reach beyond the tip of their rather pointed abdomens. Females, however, have underdeveloped wing that are much shorter than their broad, rounded abdomens. The lighter band markings are much more distinct in nymphs than in adults. Adult males are 1/2 to 5/8-inch long and the female is slightly shorter. Though both have wings, only the male can fly. Brown banded cockroaches often hide their egg cases in or under furniture.

Within a room, these roaches tend to prefer warmer, drier and higher locations than any of the other urban pest roaches. They are often found in upper cabinets or in other rooms besides the kitchen or bathroom. In some places they are known as TV roaches because of their frequent presence in living room furniture and appliances.

The American cockroach is the largest of the house cockroach. Adults of this species are 1 1/2 to 2-inch long. They are the largest of all the cockroaches common in Southeast Texas. They are shiny, reddish brown with a pale brown or yellow band around the edge of the head and back. The wings of both the male and female extend slightly beyond the body. Although incapable of extended flight, both male and female can glide when disturbed.

American cockroaches are found in kitchens and pantries, as well as sewers and basements, particularly around pipes and drains. They are active when the temperature is 70 degrees or higher, but they can survive lower temperatures with the right conditions. 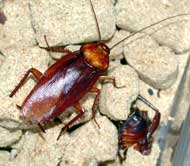 Smokybrown cockroaches range from 1¼ to 1½-inch long, are dark brown to black and have wings longer than their bodies.

Smokybrown cockroaches require high humidity for survival and are found outside in wooded areas that provide shade and moisture. They can also be seen in protected areas around homes, such as tree holes and mulch, and in buildings and attics. Stacks of lumber and firewood, sewer-access openings and trash piles can contribute to infestations. Once in structures, they are commonly found in attics or near fireplaces.

Oriental cockroaches are large, almost black shiny cockroaches which live in sewers and similar wet, decaying organic matter. They are sometimes called water bugs because they come out of drains, or black beetle cockroaches because of their smooth, dark bodies. Males are about 1-inch long, with wings that cover only part of their abdomen. Females are about 1 1/4-inch long and have only short stubs of wing pads.

Oriental cockroaches are often found in sewers and will enter structures through drains.