Sooner or later, many of us will have the unpleasant experience of being stung by a bee or wasp. Most stings occur during late summer and fall when the insects are most abundant. Generally, these insects will not sting unless stepped on, touched or annoyed.

In spite of their many benefits, it may become necessary to control stinging insects if they pose a hazard. Fortunately, recovery from most stings is rapid and occurs within a couple of days. Only the females are capable of stinging because the stinger is actually a modified ovipositor or egg-laying tube. Originally, the stinger served to deposit eggs in protected areas or into the bodies of insect prey. Later, venom glands evolved and the stinger became a weapon to paralyze prey and defend the nest.

Symptoms and Treatment of Stings

Insect stings are normally characterized by moderate to severe pain, localized reddening and swelling and occasionally a mild headache and fever. Treatment involves disinfecting the wounded area with soap and water. Meat tenderizer, which contains an enzyme that breaks down the venom, and/or a baking soda paste can also be applied to the sting site to help relieve pain. Several over-the-counter sting remedies are available at pharmacies.

In allergic individuals, insect stings can cause a life-threatening systemic reaction which can lead to anaphylactic shock. Symptoms in allergic individuals usually appear within minutes after the sting. Localized swelling can be extensive, with a hives occurring over the body. There also may be a choking sensation, accompanied by difficulty breathing and blueness in the lips and extremities. This may be followed by nausea, vomiting and loss of consciousness.

Should any of these symptoms appear following an insect sting, a physician should be consulted immediately.

Since there is no way to completely avoid stinging insects, individuals allergic should consider a desensitization program and carry emergency medication. 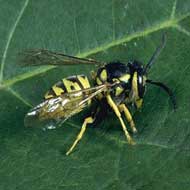 Yellow jackets feed on insects, spiders and a wide variety of other food items. They are medium-sized, stout-bodied and black with bright yellow bands. Yellow jackets construct globular paper nests, usually in underground cavities such as rodent burrows, compost piles and wall voids.

Occasionally these wasps build aerial nests in garages, crawl spaces or other enclosed areas. Nests are built of paper made by stripping wood fibers from trees, fences, garden stakes and other wooden structures. The combs are built in tiers and are surrounded by an outer paper covering.
When yellow jackets are disturbed, give them plenty of room since they are capable of inflicting multiple painful stings. If yellow jackets become excited and are about to attack, do not panic. Make no sudden movements and retreat slowly and calmly from the area.

Yellow jackets are scavengers and are frequently found foraging around compost piles and garbage receptacles. Their activity can be discouraged in the vicinity of patios, parks, picnic and other recreational areas by covering all food and disposing of waste in covered containers.

Turning compost piles regularly and placing insecticide resin strips in the lids of garbage cans and dumpsters will help reduce the numbers of yellow-jackets in these areas.

Yellow jackets are highly attracted to overripe fruit and prompt removal of fallen fruit should help reduce the attractiveness.

Paper wasps are about 1-inch long, have a spindle-shaped body and are marked with a brown and yellow pattern. Paper wasps construct umbrella-shaped, single-layered nests with exposed cells. Nests are sometimes found in trees and shrubs, but are frequently under building overhangs, in attics, barns, garages and sheds.

Nests are initiated in the spring by a single overwintered queen called the Foundress. Other fertile females often join the colony later in the season. Colonies may produce up to 200 individuals by summer's end. These wasps are not considered overly aggressive and usually pose a threat only when their nests are disturbed. However, foraging wasps can cause considerable annoyance as they fly in and about entrances of buildings. 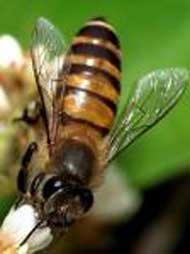 Honey bees are social insects found all over the world, are active pollinators and produce honey which feeds their young in colder months. The honey bee is the only social insect whose colony can survive many years.

Honey bees produce honey from the pollen and nectar of the plants they pollinate. They store the honey in honeycombs in their nests. They often build their nests in tree crevices, but will occasionally build nests in attics or chimneys.

Honey bees do sting, but they only sting once. The sting can be extremely painful if the stinger is not immediately removed from the sting. Those allergic to insect stings will have a more severe reaction.

Honey bees may become troublesome when they swarm or build colonies in or near residential areas. Honey bees occasionally invade homes and establish a colony, building combs of wax containing honey, pollen and brood in wall spaces.
Once established, a colony is difficult to remove because it usually involves structural modification of the building. To be effective, the honey and wax should be removed along with the bees or the site will remain attractive to other swarms.

CAUTION: You should never use honey or wax from honey bee colonies that have been treated with an insecticide.

Bumble bees are large, robust bees covered with dense black and yellow hairs. They commonly reach one inch in length.

Bumble bees often nest in the ground, but can be found around patio areas or decks. They will sometimes build their nest in soffits of attics.

The occupants of a disturbed bumble bee nest will buzz loudly and defend their nests aggressively. As part of their aggressive defense of their nests, bumble bees will chase nest invaders for a considerable distance. The bumble bee sting is one of the most painful. Unlike honey bees, bumble bees can sting more than once.
These bees most commonly become a problem when they establish nests close to a sidewalk or near building foundations.

To avoid confrontations with bumble bees, stay clear of patches of flowers visited by adults. 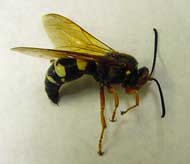 Cicada Killers can grow up to 2-inch long and are boldly marked with yellow stripes on a black body. Cicada killers are most abundant during midsummer when their prey, the cicada, is active.

Cicada killers attack, sting and carry paralyzed cicadas back to underground burrows. These burrows can be found near walks, driveways and retaining walls and are usually identified by the presence of fresh soil around the 1/2-inch entrance hole. Once the paralyzed cicada has been dragged underground, the wasp deposits an egg on it and upon hatching, the larva uses the cicada as a source of food.

These wasps normally are very docile and are unlikely to sting unless provoked. If nesting activities become a problem, infested areas can be treated with an insecticide. 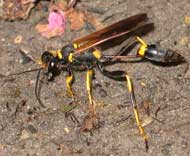 Mud daubers are 1 to 1.5-inch wasps with the front portion of the abdomen long and highly constricted, giving them a threaded waist appearance. These wasps range in color from metallic blue to black and feed almost exclusively on spiders. These wasps do not defend their nests and are not likely to attack people.

Mud dauber nests are constructed of mud or clay and often are found attached to the walls or under the eves of buildings. When emergence holes are present in nests, the wasps have completed their life cycle and are no longer present. These nests should simply be removed and discarded.
Nests without holes can be removed and crushed or treated with an insecticide.

Digger wasps are beneficial. They appear in the morning and fly over turf in search of beetle grubs or the larvae of other insects. These wasps generally do not sting unless handled. If control is desired, we recommend a yard treatment. Such treatments also will reduce turf insect populations.

Africanized killer bees look so much like a regular honey bee that the only way to tell the two apart is by measuring their bodies. Africanized bees have different wing measurements than honeybees.

These bees defend their colony and attack when threatened.

Africanized bees have small colonies, so they can build nests in unique places. They have been known to live in tires, crates, boxes and empty cars.
Their venom is no more dangerous than regular honeybees-they just tend to attack in greater numbers, which causes more danger to humans. 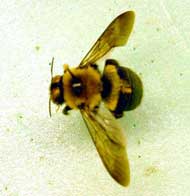 Carpenter bees look like typical bumblebees but often lack yellow stripes. They are solitary bees. These large, dark-colored bees are similar in size and appearance to bumble bees. They can be distinguished from bumble bees by their hairless abdomen. Carpenter bees make their nests in beams, rafters, telephone poles and other wooden structures and extensive tunneling by carpenter bees can damage timber.

Unlike bumble bees, carpenter bees are solitary insects. Female carpenter bees will chew a tunnel into a piece of wood to build a nest gallery. The bits of wood she chews and deposits outside the nest are called frass. The male carpenter bee guards the outside of the nest. He does not have a stinger, but his constant buzzing causes concern for some. Carpenter bees bore through soft woods to lay eggs and protect their larvae as they develop.

Carpenter bees do not pose a public health threat.