Ants are social insects and have a caste system similar to subterranean termites. There are many different species of ants, but luckily the control measures are somewhat similar. The list of ants below are the most common found and in no way a complete list of the ant species.

If you are having difficulties with any of these ants, give Solutions Pest Management a call and we will advise you on the best course of action to eradicate the problem. 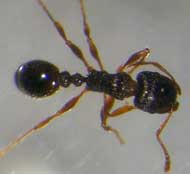 Pavement ants are identified by shades of brown and black and about 1/10-inch long. Their legs and antennae are lighter than the rest of their body and they have parallel lines across their heads and bodies. They are found under and around pavement and curbs, but will also occupy buildings in the wall and subfloor. These ants can also be identified by their slow movement. When a nest is located around paved areas, control is easy and direct. When they have nested indoors, control becomes a problem.

These ants will eat almost anything including insects, seeds, honeydew, honey, bread, meats, nuts and cheese. Pavement ants do not pose a public health risk, but they can contaminate food and should be avoided.

The Carpenter ant is a wood destroying insect like the termite. They are among the largest species of ants ranging from 1/4 to 3/8-inch long. They have large mandibles, which they use for chewing into wood. Most are black, but there are subspecies that are yellow or red. These guys mostly hang out in damaged or dead wood such as stumps and logs. As with most ants, they will forage up to 100 yards away making the location of the nest difficult to discover. They do not consume wood, but make galleries in wood to nest. Treatment includes liquid and dust applications to afflicted areas and complete eradication is easily achieved if nest is located.
Carpenter ants get their name because they excavate wood in order to build their nests. Their excavation results in smooth tunnels inside the wood. Carpenter ants mainly attack wood that is or has been wet and damaged by mold. Even though these ants first invade wet, decayed wood, they may soon begin building paths through dry, undamaged wood. They usually come into buildings through cracks around doors, windows or through holes for wires. They will also crawl along overhead wires, shrubs or tree limbs that touch the building far above the ground. Carpenter ants need a constant water source to survive. If carpenter ants gain entry to a structure, they pose a property threat.

Argentine ants are light to dark brown and, at maturity, reach about 1/10-inch long and have antennae with 12 segments.

Argentine ant colonies can grow to monumental size and they have no known natural enemy. The borders of their colony sometimes cover entire habitats. Argentine ant queens also assist with foraging for food. The ant gives off a musty odor when crushed.
Argentine ants deposit trails continuously, instead of just from nest to food source. This habit ensures they do not waste time visiting the same area for food. They prefer to eat sweets but they will eat almost anything including meats, eggs, oils and fats.

Argentine ant colonies are located in wet environments near a food source such as in mulch beds and under pavement. Argentine ants do not pose a health threat but they can contaminate food.

Odorous house ants are burgundy to black in color and about 1/4-inch long. They are identified by their multi-segmented antennae. These ants nest indoors and behind brick, stone and walls. They travel via means of pheromone trails. Each ant leaves a little scent for the others to follow. They acquire their name due to the unpleasant odor released when they are crushed.
Odorous house ants like to eat sweets, especially melon.

Typically living for several years, these ants make their homes in exposed soil and wall cracks. These ants do not pose a public health risk but they can contaminate food and should be avoided. 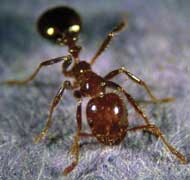 Fire Ants are about 1/4-inch long and easily distinguishable by their red coloring. They prefer to nest in the ground in areas 1 to 2 feet in diameter. Fire ants are very active and aggressive and will sting intruding animals, sometimes to death. Nests are usually easy to locate and termination of the colony is quick and direct.
Fire ants nest in soil and build mound nests. They will build large mounds and sting humans who come across a nest. The ant will gain entry to a building through holes or cracks.

The sting of a Fire ant is painful and often results in a raised welt that becomes a white pustule. Often, a person stung by a Fire ant receives multiple painful stings from more than one of the ants. Those allergic to insect stings will react more severely.

Pharaoh ants are very small and most workers are about 1/16-inch long. These ants range from yellow to light brown in color. The thorax lacks spines and the petiole has two nodes. Pharaoh ants can be distinguished from Thief ants because they have a three-segmented club at the end of the antenna.
These ants do not swarm. Reproductive females mate in the nest and new colonies are formed by budding which means that a part of the main colony moves en masse to a new location, yet is still somehow connected to the original colony. There may be hundreds of thousands of these ants in a colony. A female produces 350 to 400 eggs in her lifetime, during which the entire life cycle of the egg is completed in 38 to 45 days at room temperature. Indoors, these ants develop year round. Workers live approximately nine to 10 weeks, and queens live four to 12 months.

Pharaoh ants are widely distributed throughout the United States. They can nest outdoors and are at times a crop pest. They cause major problems in homes and institutions such as hospitals hotels, prisons or apartment complexes and nest in warm, hard to reach locations like walls, subfloor areas, wall sockets, attics, cracks, crevices, behind baseboards and furniture. Pharaoh ants eat dead or living insects, but seem to prefer meats or greases. They also feed on sugars, syrup, fruit juices, jellies and cakes.

Pharaoh ants are an especially dangerous pest in hospitals where they have been found infesting the dressings on patients' wounds, feeding on secretions from newborn infants and in intravenous tubes.

Ghost ants are recognized by their dark head and pale or translucent legs and gaster (abdomen). This coloring makes this tiny ant, 1/16-inch, seem even smaller.

The ghost ant's diet consists mainly of sweets but, they will also feed on grease and occasionally living or dead insects. They exhibit a high need for moisture and, although colonies are usually established outside, they can readily set up camp inside domestic houses during dry conditions.

Observed in infested buildings, with the naked eye they are quite difficult to distinguish from Pharaoh ants because they are virtually of the same size.
The worker ants form trails like Pharaoh ants, taking food back to the nest, and the queens are communal, meaning there can be several queens in a colony as well as several thousand workers.

Little black ants are 1/16-inch in length, shiny black and have 12 segments with a three segmented club.

Little is known about the life of this ant. Colonies are medium to large, containing up to 2,000 workers and many queens. Colonies consist almost exclusively of workers and brood (eggs, larvae, and pupae) during most of the year, but winged males and females are produced during the summer. Nuptial flights have not been observed but probably occur. It is presumed that most nests are established by one or two queens. In the laboratory, queens may live approximately one year; workers may live about four months.
Nests can be found in the soil in open areas of lawns or under objects such as stones, bricks, wood and logs. In buildings, they nest in woodwork, wall voids, masonry and under carpets. At high population densities, these ants may become widely dispersed throughout a structure and invade nearly every crack and crevice. They are highly visible on established foraging trails, particularly when they invade food cabinets and pantries.

They can usually be controlled by limited insecticide applications or the use of baits. Surveys should be done inside and outside of the home to locate all nests. Outdoor colonies can be treated with a residual insecticide by drenching the nest sites, using a compressed sprayer. Nests in wall voids can be treated by injecting aerosol through cracks and crevices and around baseboards. If nests cannot be located, toxic baits can be effective when placed on foraging trails. It is a good idea to remove all liter and objects under which ants can nest, and to seal all cracks in exterior walls where ants can enter. 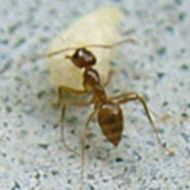 A new exotic invasive pest ant species was found around Houston, TX, in 2002, and has begun to spread with human assistance. The ant has yet to be identified to species and is commonly referred to as the Rasberry crazy ant, Nylanderia sp. nr. pubens (LaPolla, et al). Currently, little is known regarding the biology of this ant.

Appearance of many (millions) of uniformly-sized 1/8-inch long, reddish-brown ants in the landscape; foraging occurs indoors from outdoor nests.
-Ants that form loose foraging trails as well as forage randomly (non-trailing) and crawl rapidly and erratically (hence the description "crazy" ant).
-Ant colonies occur under landscape objects like rocks, timbers and piles of debris. These ants do not build centralized nests, beds or mounds, and do not emerge to the surface from nests through central openings.

The description of the Rasberry crazy ant is very similar to the species description for Nylanderia pubens, the Caribbean crazy ant. Research on the correct identification of this ant in Texas, including the morphology and phylogenetic characteristics, is ongoing. Currently, there is no approved common name for this ant by either the Code of Zoological Nomenclature or the Entomological Society of America.

In infested areas around the Houston and Gulf areas of Southeast Texas, large numbers of Rasberry crazy ants have caused great annoyance to residents and businesses. In some situations, it has become uncomfortable for residents to enjoy time in their yards. Companion animals may, in some cases, avoid the outdoors as well and wildlife, such as nesting songbirds, can be impacted. The economic impact is currently unknown.

Rasberry crazy ants do not have stingers. In place of a stinger, worker ants possess an acidopore on the end of the abdomen, which can excrete chemicals for defense or attack. They are capable of biting and cause a relatively sharp pain that quickly fades.

In areas infested by the Rasberry crazy ant, large numbers of ants have accumulated in electrical equipment, causing short circuits and clogging switching mechanisms leading to equipment failure. In some cases, the ants have caused several thousand dollars in damage and remedial costs.

Few worker ants forage during cooler winter months.
In spring foraging activity begins and colonies grow, producing millions of workers that increase dramatically by mid-summer (July-August).
Ant numbers remain high through fall (October-November).
Many of the typical control tactics for other ants do not provide adequate control of this ant. Because colonies predominantly nest outdoors, reliance on indoor treatments alone to control these ants foraging inside structures is not effective. Solutions Pest Management recommends both indoor and outdoor yard treatments to help control the population.

Worker ants are not attracted to bait products. There are treatments available for this ant that offer temporary buffer zones using contact insecticides applied to surfaces. These treatments are often breeched within two to three months post application. Effective products involved with the treatments are not readily available to the consumer.